How to Identify Female and Male Marijuana Plants 11 Nov, 2021 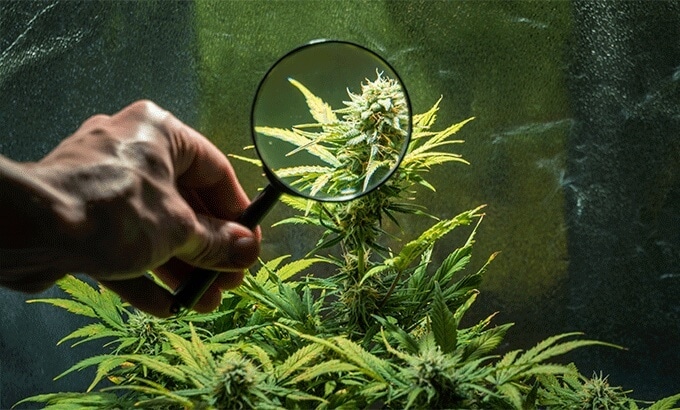 Marijuana is a dioecious plant, which means there are distinctly different male and female varieties of the plant. The female marijuana plant grows flowers, while the male marijuana plant produces pollen that fertilizes those flowers. After marijuana flower is pollinated, it creates seeds that can grow into new marijuana plants. And thus the circle of life continues.

Female marijuana flower, also called bud, is the part of marijuana that’s rich in tetrahydrocannabinol (THC) and cannabidiol (CBD). Flower is what people consume for recreational or medicinal purposes. Male plants don’t produce flowers and are therefore quite low in cannabinoids compared to female plants.

People usually grow marijuana plants for their flowers, so they focus on growing female plants. Most growers also want to keep male plants away from their female plants, since seeded flower is considered undesirable. Seeds are inconvenient and they also make flower less potent. If a flower is expending energy on creating seeds, it has less energy to make cannabinoids like THC. Seedless flower, or sinsemilla, tends to be significantly more potent than seeded flower.

The majority of growers want to avoid having male plants in their garden, but there is a notable reason to grow male marijuana plants: crossbreeding. As dioecious plants, marijuana seeds get half of their genetics from their mother plant and the other half from their father plant. Breeders who are looking to create new strains want to grow male marijuana plants with great genetics so that they can use them to pollinate female strains with great genetics.

Whether you’re a budding breeder or simply a grower who wants to keep male plants out of your garden, it’s a good idea to learn how to identify female and male marijuana plants. When you can spot the difference, you’ll have more control over your grows. Luckily, once you know what to look for, it’s very easy to tell female and male cannabis plants apart (and to spot the rare hermaphrodite plant that may pop up in your garden). Here’s how to identify male and female marijuana plants.

How to Identify Marijuana Plant Gender 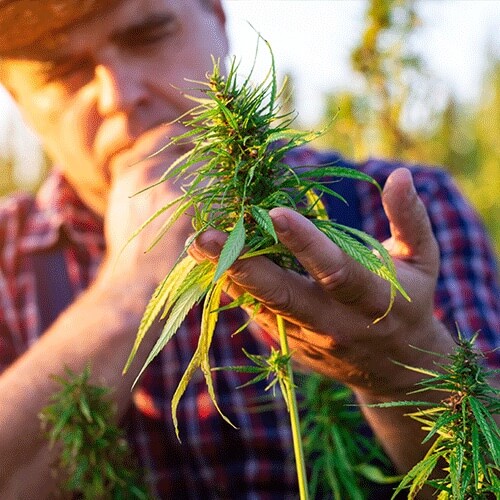 Unfortunately, you can’t tell the difference between male and female marijuana plants during germination or the seedling stage. Female and male cannabis seeds and seedlings look exactly the same. Even feminized seeds, which are seeds that have been genetically engineered to produce female plants, look just like regular seeds. And while they produce female plants 99.9% of the time, feminized seeds can still produce male plants. So, you still need to watch for signs of their gender as they grow.

Once you’re a few weeks into the vegetative stage, you can usually tell a male from a female plant. Marijuana plant gender then becomes obvious during the flowering stage. However, you don’t want to wait until the flowering stage to find out that a plant you thought was female is male, or vice versa. At that point, a stray male plant could have already pollinated a whole crop of female plants. Ideally, you want to spot marijuana plant gender early in the vegetative stage.

During the vegetative stage, a marijuana plant starts to grow in height and size. A cannabis plant in this stage is developing its root system, becoming taller each day, and growing its branches and fan leaves.

Around the fourth week of growth, marijuana plants also start to grow pre-flowers. On a female plant, these will become flowers. On a male plant, they’ll become pollen sacs. You can’t always see these when they start to grow at four weeks, but you can almost always find them by the six week mark. Note that male plants tend to develop their pre-flowers a week or two earlier than female plants.

You can usually tell the difference between female and male pre-flowers with the naked eye. If you’re having trouble spotting the finer details of your cannabis plant’s pre-flowers, try looking at them with a magnifying glass. 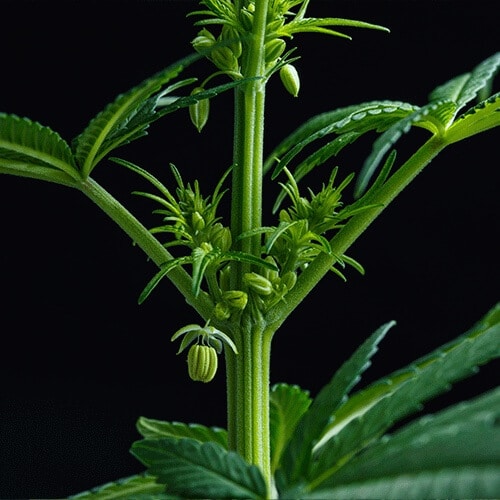 The sex of your plant will be quite clear once it enters the flowering stage.

Male cannabis plants produce pollen sacs in clusters. When these ball-like sacs open, they release pollen that looks like white dots or powdered sugar. The emptied sacs of a male plant look like flowers with tiny petals.

Female cannabis plants produce flowers that look quite different from other flowers. Cannabis flowers are dense and compact, with a bud-like appearance. Unlike most flowers, cannabis flowers don’t have soft, open petals. Instead, they have a core made of tiny leaves called bachts, then also feature long leaves called sugar leaves. These thin leaves are called sugar leaves because they’re covered in cannabinoid-rich trichomes that look much like sugar crystals from a distance.

Cannabis plants can sometimes be hermaphrodite. Hermaphrodite plants develop both male and female reproductive organs. Hermaphrodite cannabis plants occasionally occur due to genetics, but most often they occur because a plant is under some type of stress. Examples of stressors that can lead to marijuana hermaphroditism include root rot, excess heat, and malnutrition. Be aware that marijuana plants that you typed as female can become hermaphroditic even well into their flowering stage, so you should continue to inspect female plants as they grow.

11 Nov
Marijuana is a dioecious plant, which means there are distinctly different male and female varieties of the plant. The female marijuana plant grows…
https://essencevegas.com/wp-content/uploads/2021/11/Identify-Female-and-Male-Marijuana-Plants.jpg 410 680 [email protected] https://essencevegas.com/wp-content/uploads/2021/02/Essence-Cannabis-Dispensary-Logo.png [email protected]2021-11-11 06:00:422021-11-18 10:39:46How to Identify Female and Male Marijuana Plants
How Long Does a Cannabis High Last?

Decarboxylation 101: How to Decarb Cannabis
Scroll to top