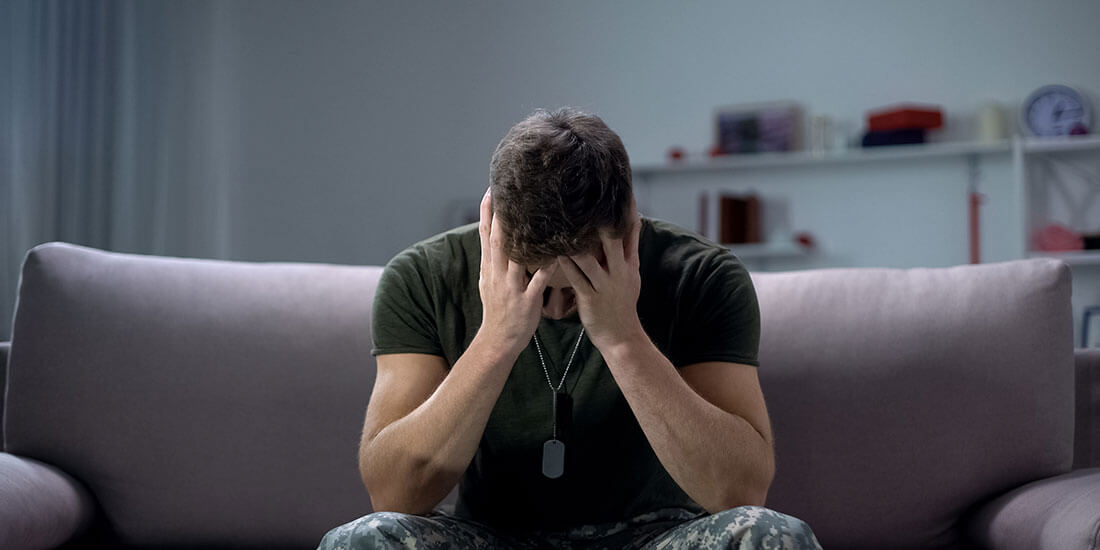 PTSD, short for post-traumatic stress disorder, is a mental health condition that’s triggered by witnessing or experiencing a terrifying event. PTSD can cause symptoms like flashbacks to traumatic experiences, nightmares, and severe anxiety, all of which can have an enormous impact on your quality of life. There are various solutions to fight this disorder and medical marijuana is considered as one of the alternative methods of treatment for PTSD.

Post-traumatic stress disorder is a common issue among the general population, and it’s even more common among veterans who have returned from serving our country. Whether you are a veteran or a civilian, if you’re experiencing PTSD, it’s important to seek treatment for your symptoms. Having PTSD can make you feel like you’re trapped in a prison of your own thoughts. It can have a tremendous negative impact on how you feel from day-to-day, and it can cause problems with your social relationships and work life.

So, if you have PTSD, what can you do to treat it? Doctors often recommend a multi-pronged treatment approach to those with PTSD. Doctors may recommend trying both cognitive behavioral therapy and medications. They may also advise patients to practice good self-care and build a strong support network to help them deal with their PTSD symptoms. Additionally, some doctors prescribe medical marijuana to help patients suffering from PTSD manage their symptoms.

While the scientific research surrounding PTSD and cannabis use is still in its infancy, there have been some initial studies that found cannabis use may be helpful in managing PTSD symptoms. And currently, doctors can prescribe medical marijuana for PTSD in around half of all US states.

But how can marijuana help PTSD? Why do some doctors prescribe medical marijuana for PTSD? Below, we’re taking a closer look at using medical cannabis for PTSD. We’ll talk about PTSD symptoms, potential cannabis benefits, cannabis vs. prescription medications for PTSD, and more. 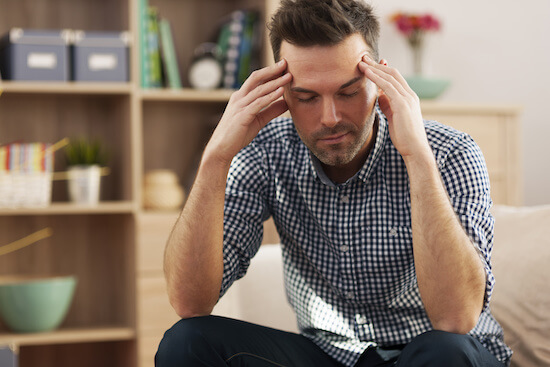 Before we talk about the specifics of how medical marijuana is sometimes used to ease post-traumatic stress disorder symptoms, we’ll first talk a bit about the symptoms of PTSD. Each person’s unique PTSD symptoms can vary. And your doctor may suggest you try a specific type of cannabis that may work best for your unique PTSD symptoms.

According to the Mayo Clinic, PTSD symptoms generally fall into one of four categories:

While this list of symptoms can give you a general idea of the symptoms of PTSD, know that each person’s symptoms can vary. A person with PTSD may experience some, many, or all of these symptoms. Then, for each individual, the intensity of their symptoms can also vary. 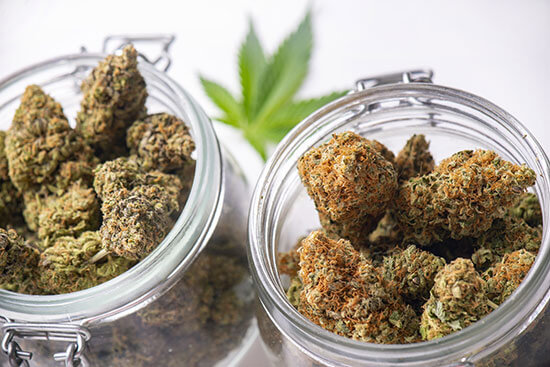 How People are Normally Treated for PTSD: Prescription Medications 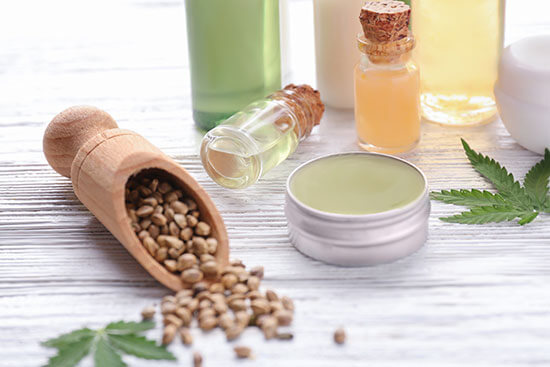 People who are suffering from PTSD and chronic pain (many people, particularly military veterans, who have PTSD also experience chronic pain) are usually prescribed these types of prescription drugs to treat PTSD:

Unfortunately, these prescription treatment options can sometimes create a “zombie-like” effect, leaving the patient feeling numb and detached from everyday life. Numbness and detachment are symptoms that can sometimes already be present in a person with PTSD. So some patients with PTSD may find that certain prescription drugs can exacerbate their existing issues.

Then, antipsychotics and antidepressants, while they may work for some, can make things worse for others due to unpleasant side effects. For example, SSRIs (selective serotonin reuptake inhibitors) can help with depression for some, while they can also produce suicidal thoughts and behaviors in others. So, in certain cases, prescriptions can sometimes worsen existing mental health problems.

Additionally, it’s important to note that opioid painkillers are potentially dangerous. Opioids can be highly addictive and overdoses and death due to opioids are common.

The Use of Cannabis vs. Prescription Drugs for the Treatment of PTSD: One Veteran’s Experience

In a 2018 press conference presented by the Oklahoma Cannabis League, Cody Barlow shared his experience using cannabis to treat his symptoms. Barlow stated that after serving in the Navy from June of 2013 to September of 2017, he was diagnosed with, “PTSD, major depressive disorder, panic disorder with agoraphobia, among many other things – chronic pain, insomnia, the list goes on.”

“The only option for treating those, aside from therapy, is prescription drugs. The VA has been well-known to prescribe drugs heavily. That’s their go-to. Over the course of 2017, I averaged out the number of pharmaceutical drugs that I had taken in pill form to be 9,000 for the year. Averaging about 24 a day, I had some other pills that were ‘as needed’ so I would take upwards of 24 up to 30 pills a day.”

But Barlow found that his prescription treatments did not work for him. He stated:

“Through that course of treatment, I wasn’t getting any better. Things weren’t improving, I just felt really numb to the world. I felt dulled out and was tranquilized. I was on so many heavy sedatives I couldn’t function as a normal person anymore. I was giving up hope that that’s what was supposed to help me and it wasn’t. I felt like I was reaching the bottom and I was ready to end it.”

Barlow then said that that was when he finally decided to try cannabis for himself. He visited a friend in Colorado, since cannabis was not legal in his home state of Oklahoma at the time, and tried cannabis for the first time. Barlow spoke on the positive effects self-medicating with cannabis had on his symptoms, saying:

“I felt more normal than anything. I felt balanced out, my racing thoughts had slowed down, my depression had lifted. I felt like I was in the moment with my friends and family in the room like I could function again.”

The feelings of fear, worry, hopelessness, and anxiety associated with PTSD cannot be fully eliminated. But many do say that the use of marijuana provides a respite sans all the debilitating effects of prescriptions. Still, it’s important to note that the results of using cannabis are dependent on the type of cannabis you are using since the different types of cannabis will affect the endocannabinoid system differently.

For instance, cannabis contains two major cannabinoids, tetrahydrocannabinol (THC) and cannabidiol (CBD). THC is the more popular of these two cannabinoids because it’s associated with feelings of euphoria. But, because it activates the amygdala (the part of the brain responsible for fear), it’s also linked to feelings of anxiety and paranoia.

CBD, on the other hand, is a non-psychoactive compound that can counteract these feelings. In fact, there are studies that show that taking CBD on its own can reduce or even eliminate anxiety.

Many people who have tried medical marijuana for PTSD have reported that it is incredibly helpful for alleviating their symptoms. If you’re interested in trying marijuana for your PTSD (and doing so is legal in your state), we encourage you to ask your doctor whether or not medical marijuana may be right for you and your overall health care plan.

Additionally, if you’re a veteran in Nevada with PTSD, please note that Essence Cannabis Dispensary offers a special discount — 10% to 40% off on all purchases, depending on the level of disability — to Nevada veterans with a medical cannabis card.