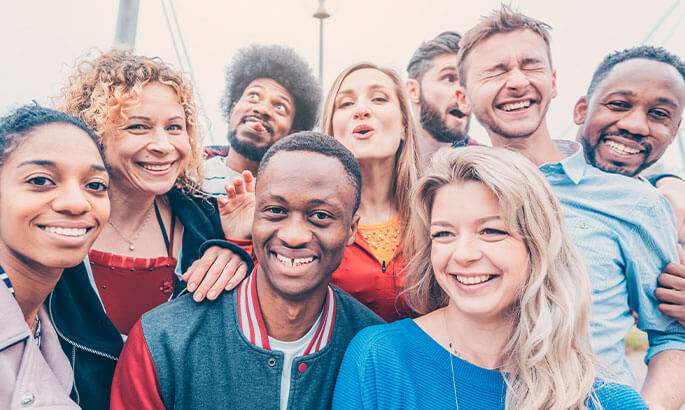 If you’ve ever shared cannabis amongst a group of friends, you’ve probably experienced some cannabis-induced laughing fits. Marijuana can give you a serious case of the giggles, especially when you’re around friends who also seem to find everything funny. But why, exactly, does cannabis make you laugh? To answer this question, we’re taking a closer look at why we laugh and what science can tell us about how marijuana interacts with laughter.

Why Do People Laugh?

Laughter is actually a very complex process. Neuroscientists have found that laughter involves many different areas of the brain, including the areas that regulate language, memory, logic, motor function, and auditory interpretation. Generally speaking, laughing is a motor reflex, but what causes it is a complicated response to humor, which varies from person to person.

So, many areas of the brain are involved in interpreting humor and, therefore, making you laugh. But MRI brain scans have shown that two parts of the brain are more involved in interpreting humor than the rest of your brain. The frontal and temporal lobes of your cerebral cortex do more heavy lifting when it’s time for your brain to decide whether or not something is funny enough to reflexively laugh at.

Speaking of the frontal and temporal lobes of the cerebral cortex, these two areas of the brain just so happen to get significant stimulation from cannabis use.

Why Does Marijuana Make You Laugh? 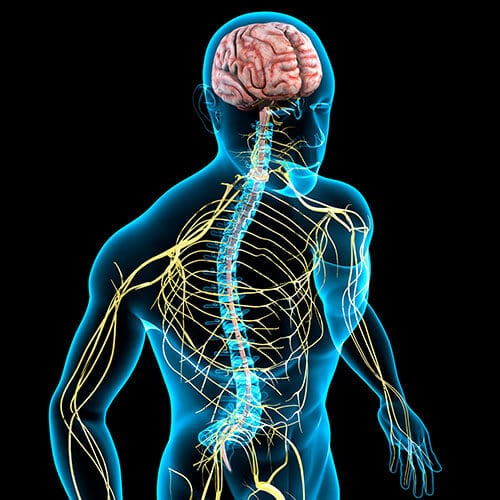 When you use marijuana, the cannabinoids and terpenes from that marijuana start interacting with your endocannabinoid system (ECS). The ECS is a complex nerve signaling system that’s thought to play a role in regulating many bodily systems, including mood, immunity, stress, memory, and pain.

Because they interact with such a widespread bodily system, cannabinoids can affect the body in many ways. One of these ways is by stimulating blood to the right frontal lobe and the left temporal lobe of your brain, which are the areas of the brain most closely associated with laughter. While more research is needed, some scientists have theorized that the stimulation caused by marijuana makes the brain more sensitive to laughter triggers. Meaning, essentially, it may cause you to laugh more easily.

Another effect of marijuana that may stimulate laughter is euphoria. Euphoria is a scientific term for a feeling of intense pleasure and happiness. Your brain feels a burst of euphoria when you laugh, which is the result of dopamine and serotonin activity. Your brain may also feel euphoria if you’ve consumed tetrahydrocannabinol (THC).

Alongside cannabidiol (CBD), THC is one of the two main cannabinoids in the marijuana plant. CBD is non-psychoactive, while THC is strongly psychoactive. One of the most common psychoactive effects of THC is euphoria.

Marijuana research is still in its infancy, but the current research suggests that THC is very similar in structure to an endocannabinoid called anandamide, which humans produce naturally within the body. Anandamide is a neurotransmitter that plays a major role in how we feel pleasure and process reward signals. THC happens to have almost exactly the same shape as anandamide, so researchers believe it may be able to communicate with endocannabinoid receptors and neurons in a very similar way. And that may be why THC is able to stimulate a sense of euphoria in the brain.

Euphoria itself isn’t the cause of laughter, but it does create great conditions for laughter. When you’re experiencing euphoria, you feel safe, carefree, happy, and stress free. It puts you in a different state of mind, one that’s more open and relaxed, and generally less anxious and depressed. Studies have shown that brains that are experiencing stress or depression actually have less activity in the humor centers of their brain. So, while more research is needed, it’s possible that euphoria may help boost the activity in those parts of the brain, making it easier for you to find something funny and break out into hysterics.

Have you heard the expression, “laughter is contagious?” It’s actually not just a saying. It’s a fact that’s supported by scientific research.

Two recent studies looked at how the brain processes social laughter and found that it, in fact, appears to be contagious. One of these studies, titled Social Laughter Triggers Endogenous Opioid Release in Humans, used positron emission tomography to identify participant response to social laughter. They found that genuine social laughter caused participants to experience a rush of endorphins in specific parts of their brains and that the participants with more opioid receptors in their brain were more prone to contagious laughter. The other study looked at this concept in a different way, yet came to a very similar conclusion. They found that laughter engages in the same brain areas as social reciprocity and emotional resonance, and that participants who were attuned to the emotions of others had a larger response to genuine laughter.

One thing to note is that, unlike lots of other things that are contagious, laughter is great for your health. Studies have shown that laughter has numerous mental and physical health benefits. In the short-term, laughing stimulates your heart, lungs, and muscles, and gives you an endorphin boost. It also triggers and relieves a stress response, relaxing you. Long-term, laughing can reduce stress, which improves your immune system and your mood. It may also help you connect with other people more easily, increasing your mental well-being. 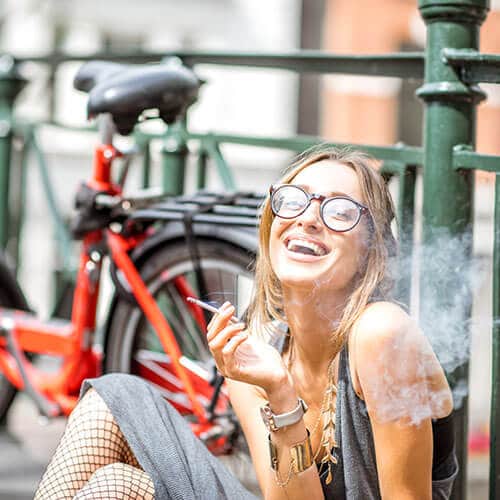 Based on the current research on laughter and marijuana, it seems that cannabis stimulates laughter by increasing blood flow in the brain, relaxing you, and getting your neural pathways ready to let out a good laugh. Studies suggest that laughing with friends naturally causes even more giggles, so using marijuana with your friends really can lead to contagious laughter.

Of course, not all strains are the best at stimulating laughter. Some cannabis strains tend to be more euphoric than others, making them better at awakening your sense of humor. If you’re looking for a cannabis strain that will help you laugh more, here are some famously giggly strains you should keep in mind:

These are just a few of the many marijuana strains that tend to induce laughter. If you’re interested in trying a euphoric strain but don’t know which to choose, reach out to us at Essence for a personalized recommendation. One of our cannabis experts would be happy to help you find a strain that will not only make you laugh, but also fit what you’re looking for in terms of potency, flavor, overall effects profile, and experience level. To get in touch with the Essence team, send us a message through our website or call your closest Essence Dispensary location.

How to Grow Cannabis Indoors: The Beginner’s Guide
Scroll to top